We're a family-owned small business interested in caring for our bees and providing you honey.

The dream of this company actually began in the early 2000's when I, Ben, took a bee keeping class in middle school. It might sound silly, but big dreams start small. I'm not sure what it was that drew me. It could have been the prospect of partnering with tens of thousands of insects to produce a beautiful golden honey crop. Maybe it was the vastness of possible skills which can be developed and used in the trade. Or perhaps it is how well the imagination is stimulated by the idea of hosting a complex society of insects in my very own back yard.

Whatever the case may be, when I received a formidably thoughtful Christmas gift from my fiancé (now my wife), I knew it was time to stop merely dreaming and start making that dream into a reality. She gave me all the reading material I needed to get my head around the steps required to become an apiarist. This fledgling program was Christened on May 1st, 2014 when I poured 3 pounds of bees into their new home.

This page shall provide you the opportunity to learn more about beekeeping and why it is so important.  We welcome your comments, questions and prayers as we continue our journey into the unknown.  Follow along as we explore the vast intricacies of the honey bee.

"Go to the bee, and learn how diligent she is,
and what a noble work she produces,
whose labours kings and private men use for
their use, she is desired and honoured by all,
and though weak in strength she
values wisdom and prevails." 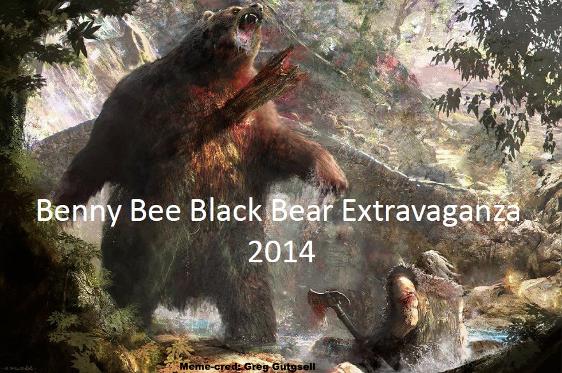 Below is a highlighted story from the Benny Bee history books.  Enjoy!

2014 was certainly a great year for Benny Bee Honey… in fact, it was the very first year!

Many really great things happened including the birth of the company itself as well as Ben’s wedding to the lovely Sarah! As a tribute to the year 2014, I would like to fulfill my promise to tell the story of how Benny Bee Honey survived one of the most dreaded things that can happen to a beekeeper… a bear attack.

To be true, many hives survive bear attacks more easily than they survive disease. However, this is only true if the beekeeper is present to somehow shoo the bear away from his precious cargo. And so, the fear of loosing the bees pales in comparison to the fear of having to face down a big scary bear. Here’s how it went down.

The hive had been going for a little over a month, so I think it occurred on either June 1st or 8th, I only know it was a Sunday. The car ride home from Sarah’s mom’s house was uneventful. We likely were listening to an audiobook. I parked the car at about 10:30pm, opened the door and got out. Then I heard it....

It was a loud crashing sound like wood falling on the floor. In my heart I knew exactly what it was… but I hoped to God that it wasn’t.  I said “Did you hear that?” Sarah’s response spoke for itself, “Did I hear what?” Then I said something along the lines of “Oh nevermind! I heard a crashing sound. We need to get our stuff and quietly. Go inside the apartment, I need to check the bees.”

Noting the tone in my voice, Sarah did what I said. I proceeded to go into my downstairs storage closet and grab… my shovel. What I was going to do with my shovel against a bear???… I still have no idea. I suppose I just wanted something in my hands to put between me and any threat that might be out there.  With Sarah safely upstairs in the apartment, I got the flashlight, turned on the backyard light, and slowly peered out through the back doorway. What I saw confirmed my dreaded suspicions. 50-60 yards away, my hive was toppled over on its side… and worse… two pairs of black furry legs could vaguely be made out in the darkness in front of the white-painted hive bodies.  All of a sudden I was beyond furious. I stormed angrily (and foolishly) ten paces to the back yard picnic table and SLAMMED my shovel down onto it while snarling primitively in order to instill a fear as great as my anger into that bear. To my surprise… the bear did not seem to move… I hesitated… then went at it again even more loudly, wishing to God I had a gun if only to make more noise. I stomped my feet while moving a little in the bear’s direction acting as wild as possible. Then to my relief, the bear ran along the tree line in a direction that was both away from me and away from the hive.

I could not tell for sure that it was gone. But realizing the sheer lunacy of my actions at that point, and hearing my wife’s concerned conversation with her mother through the window, I simply shouted “A bear attacked my beehive” to her and started my way back to the apartment. I needed to first communicate with my wife (who was understandably confused and quite afraid) and then strategize about how to deal with my upturned beehive. It took me a little while to calm down before I could think straight. In fact, Sarah told me later that she had never seen me so mad before and that she was almost more worried for the bear than for me. Eventually I got my head back enough to think of an idea that would keep me safe from the bear and would also allow me to attend to my fallen hive. My solution was to simply drive my car back to the hive. This provided light as well as a place for me to quickly go if things went sour. So, Sarah helped me suit up by tying one of her scarfs around my waist so no bees would crawl up my bee suit. She also ensured that there were little to no places that the bees could get into the bug net covering my face (I’d read online that some people got stung about 40 times or so from uprighting a bear attack). Then I was off. I drove my car around and saw just how aggravated the bees were. They were flying all over the place, especially anywhere with light. But nonetheless, with help from my headlights I was able to put the bottom box (the one most likely containing the queen) back where it was supposed to be and put the cover back on. That took at least 20 minutes with the bees and my own anxiety slowing me down.

When it was done... the unthinkable happend... I heard a very nerve-wracking sound from beyond the tree line… First, there was a crack… and immediately I paused to listen more closely. Then I heard a puff of breath from a wild animal’s nostrils… I began slowly backing away from the hive and towards my car. I got in my car, closed the door and killed the engine. Sure enough, the curious-looking, dopey nose of a black bear poked itself through the brush. Following that, a full-grown ~200 lb black bear came out of the woods and began nosing through the boxes and frames of bees that I had not yet gotten to. I sat there resigned. The bear was actually kind of cute! So for better or for worse, I was no longer angry. I just wanted the bear to leave the hive alone. My response to the bear’s presence was a natural one in my opinion.

I started my engine, revved it loudly and drove right towards that stupid bear. The reaction of the bear was truly a gift. If it had pants, I imagine it would have wet them. Nearly tripping over itself, the bear tumbled clumsily back into the woods. I honked, revved and drove around the area flashing my lights in hopes that I could force the fear of this apiary into the bear’s long-term memory. In fact, I actually left the car out there just in case our intruder decided to make another visit. The bear was gone, the hive was saved, and I was very, very tired. I went to bed that night restless. Each and every sound I heard was a bear coming to torment me. Nonetheless, I have not had any problems with the bear since that day. I put the hive back together as best I could with only 1 frame damaged beyond repair. I also moved the hive further away from the tree line. A reliable source informed me that black bears don’t like to remove themselves from tree cover. We shall see in the future if we have any more problems with large, furry mammals. I hope to never encounter a bear under circumstances like those ever again.

And so ends the tale of the Benny Bee Black Bear Bonanza. I foresee t-shirts, signs, and other paraphernalia being made to commemorate this momentous event in the not-to-distant future. I hope you enjoyed the story.

Feel free, as always, to leave comments, create memes, ask questions. I hope to hear from you!